Danae (1636-1647) is a famous painting by Rembrandt and one of the most important exhibits from the Hermitage collection. It is based on the Greek myth of Danae, the mother of Perseus.

When the ruler of the ancient Greek city of Argos was told that he was
destined to die by the hand of his grandson, he gave an order to imprison his own daughter, Danae, deep in the dungeon. But Zeus came to Danae in the form of a golden rain, and after that she gave birth to Perseus.

Rembrandt started painting Danae in 1636, 2 years after his marriage to Saskia van Uylenburgh. The artist truly loved his young wife and often portrayed her in his paintings. “Danae” was no exception. But for a long time a mystery remained: why was the similarity with Saskia not as obvious as in other paintings of the artist created in 1630s, and why did the painting style resemble creations of the later period of his artistic career?

“It turned out that the picture had been changed after the death of the artist’s wife in 1642, at a time when he had a relationship with Geert Dirks.”

Only in the middle of the XX century, with the help of X-ray, the answer was found. It turned out that the picture had been changed after the death of the artist’s wife in 1642, at a time when he had a relationship with Geert Dirks. Face features in the picture were repainted to combine faces of both artist’s beloved women.

One day the world almost lost this masterpiece. June 15, 1985 a man came to the Rembrandt Hall at the Hermitage and asked the museum workers, which paintings in the room were the most valuable. Then he approached Danae, pulled out a bottle and poured its contents directly into the center of the canvas. Painting immediately began to bubble and changed its color. Later investigation showed that the bottle contained sulfuric acid. The villain also took out a knife and cut the picture twice. The man was arrested and found insane. 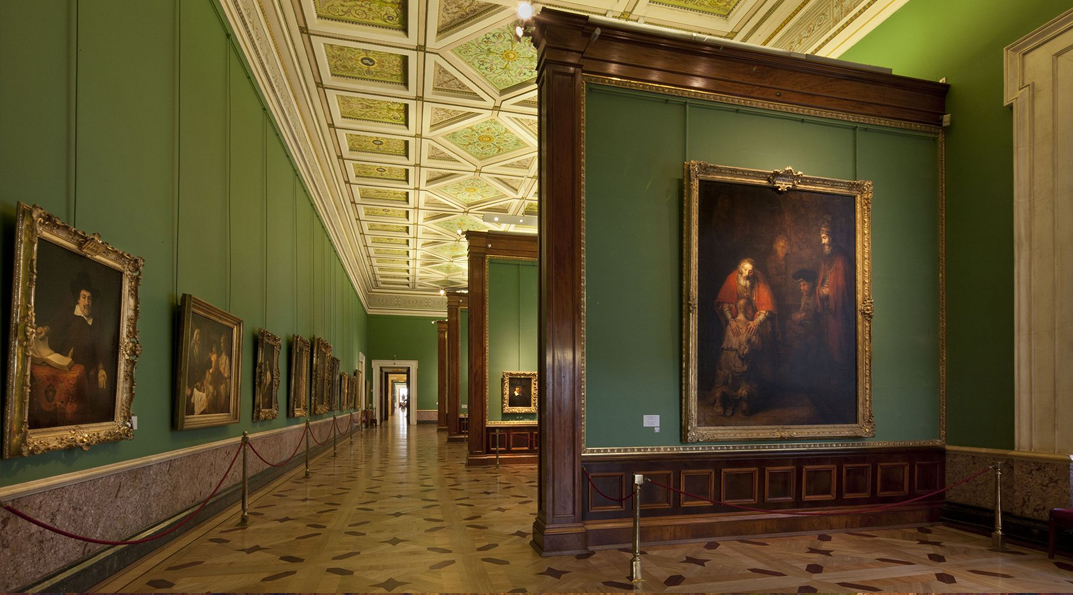 Rembrandt Hall at the Hermitage 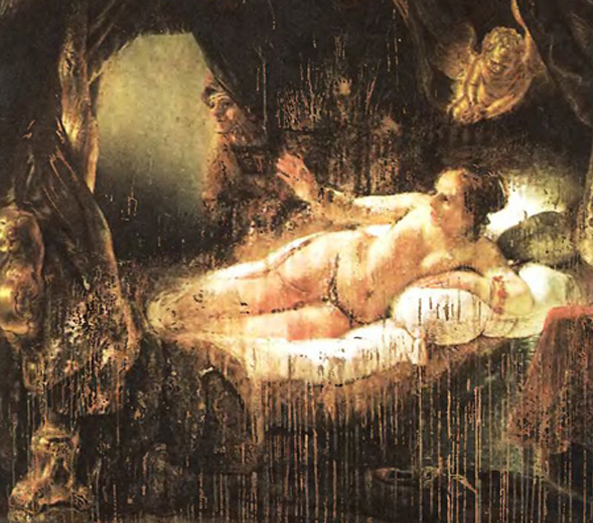 The Hermitage immediately began restoration works. Half an hour after the incident the painting was washed with water to stop acid action and processed with special compound made of glue and honey to prevent layers from peeling. In three days a special committee was created to discuss the ways of forthcoming restoration of Danae. It took almost 12 years to completely restore the  painting. At present time the picture can once again be found in the Rembrandt Hall at the Hermatage main building and is protected by armored glass to prevent any acts of vandalism. So, if you are having a day at the Hermitage, make sure to visit the Rembrandt Hall and get acquainted with this truly incredible painting.